Tipperary Sinn Féin says this comes at a time when our most vulnerable citizens are facing a very tough winter with soaring living and energy costs. Two of those who voted against raising the LPT were Tipperary's two Sinn Féin Councillors.

“People are going to be forced to choose between feeding themselves and heating their homes and the majority of councillors in Tipperary are content to increase the local property tax and compound their misery”, said Carrick-on-Suir based Sinn Féin councillor David Dunne. “We have no problem with how the funds raised by Local Property Tax are allocated or used. We fully support local pools, community centres, clubs, tidy towns, and associations benefiting from the money. We do object to how the funds have been raised”, continued Cllr Dunne. “A tax on the family home is unjust and unfair and many families simply cannot afford to sacrifice €99 towards it”.

Tipperary Town based Sinn Féin Councillor Tony Black said the way the whole vote and conversation is framed is an elaborate way to try and force Councillors who are opposed to the tax into voting for it.

“I went to doors in 2019 and asked people to trust me and vote for me. I promised people that I would under no circumstances vote for an increase in local property tax. Unfortunately, the way certain elements portray the vote makes it look like being opposed to the property tax means you are opposed to local organisations and buildings being granted funding. That couldn't be further from the truth. Places like the Excel Centre and Canon Hayes Recreation Centre deserve support and funding. If central government hadn't decimated the local authority budgets over successive governments, then we wouldn't need a local property tax and these worthy causes would still get funding”.

“Sinn Féin has alternatives to the local property tax. One such alternative is a Second homes tax which we outline every year in our alternative budget. The Local Property Tax can be removed or replaced with something fairer. The government of the day just has to be willing to do it and as we have continuously seen they baulk at the notion of increasing taxes on higher earners and are instead content with piling the burden on vulnerable lower- and middle-income families” continued Cllr Black.

Following the vote, Teachta Martin Browne commented: “It is disingenuous to argue, like so many have, that to vote against raising the LPT is to vote against local projects. That argument conveniently ignores poor Central Government funding, and the failure to pursue other funding avenues that are available”.

“Take the Derelict Sites Levy for example. In 2020, 39 sites were on the Derelict Sites Register. The amount levied was €45,100. But not one cent was collected by Tipperary County Council. At the end of 2020 the total of uncollected levies was €59,700. That is nearly €60,000 in untapped potential revenue that could have been used to support local authorities to build houses and resource communities”.

Cahir area Sinn Féin representative Cathal Ó hÉanna said: “Penalising people with a hike in the LPT is unfair and entirely inappropriate at a time when people are facing huge financial challenges. There are numerous other ways of sourcing funding for local services, than to put further pressure on working families who can least afford it”. 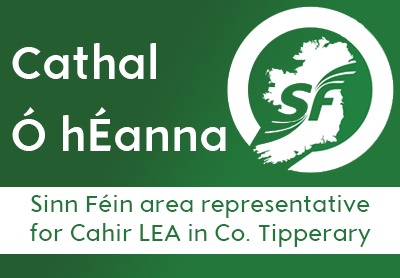