The polls and experts may be dismissing Donald Trump's chances of the White House, but he has one fervent supporter, an immigrant from Ireland now living in Virginia who heads up Women for Trump in the state and she still believes in him full barrel full bore. 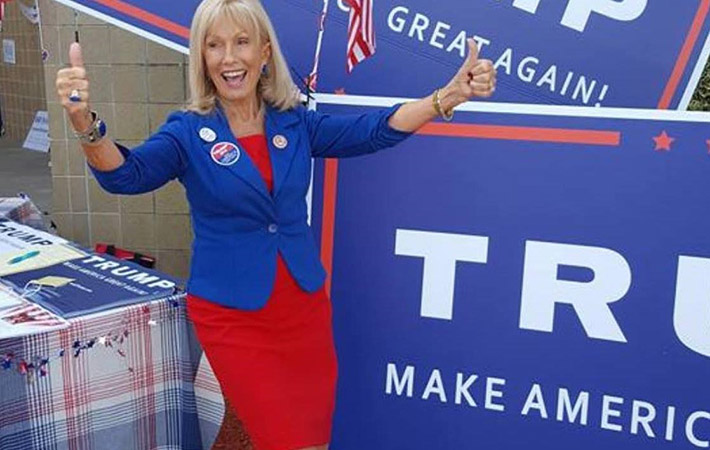 Alice Butler-Short says America needs a strong man with a very compassionate heart. Photo by: FacebookAlice Butler-Short has met and discoursed with Trump and found him to be a “strong man” with a “very compassionate heart who will pay attention to the issues that matter.” Butler-Short, (73), a native of Cahir, County Tipperary, credits Trump's bestseller “The Art of the Deal”with her belief that Trump will conquer all.She says Americans will not have any truck with socialism or a secular state with no place for God in our schools. Trump is the man who can deliver and also end the ridiculous political correctness which overshadows all debate.She believes Trump is honest and Hillary is not. Hillary Clinton, she believes, is a “congenital socialist and a liar" “while her husband is a ”lying, cheating rascal.” 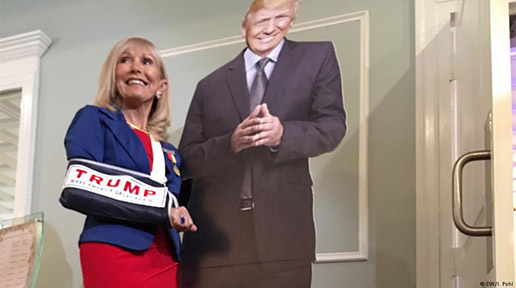 Butler-Short standing with a Trump cut-out wearing a Trump sling.When asked to explain Trump's three marriages she says he had a long happy first one but on the rebound foolishly married Marla Maples, but then married his latest bride Melania. “Better to divorce than stay married in misery,” she said.When we spoke she had just returned from a Vietnamese festival where she thinks she won several supporters for Trump. “Once you explain he is for low taxes, less regulation, pro small business they immediately understand.”She knocks on doors and maintains a large database in her home, where pictures of her with George Bush Senior and junior and other Republican luminaries bedeck the walls. In her spare time she teaches Irish dance. She now has seven grandchildren, who she regularly sees when they visit her at her beautifully appointed home.

Republicans photos and conference passes adorning the wall.A longtime Republican fundraiser and canvasser, she says she picked out Trump early on from the crowded field after reading “The Art of the Deal,” especially the final pages which she felt spoke directly to her where Trump wrote that after all his money and success he wanted to give back.“He doesn't need jets or servants or security or people trying to reach him,” says Butler-Short. "He has all those thing already. He is doing this to do his best for the country he loves.”She says when she met him they discussed her passion - looking after military wives living on the paltry widow's benefit, which can be a little as $900 a month for sergeant's wives, after their husbands are killed.“He listened and promised to take action when he was elected. I strongly believe he will.”She believes Trump has been deliberately portrayed as wrong on immigration by the media. He wants to continue legal immigration. It is the illegals he wants to stop and the jihadis she believes infiltrate themselves with the undocumented. She says there is no question some came into the country with Syrian refugees.When asked about the comparison with the Irish who were also anything but welcome post-Famine, she says the Irish loved America while many jihadi immigrants today wanted to destroy it.As for her native Ireland she believes that in 30 years the country may face Sharia law and an entirely different culture because of uncontrolled borders and an influx of Muslims. There's a strong possibility it could become part of the ISIS caliphate, she believes.Living in the exclusive suburb of Lorton, Virginia and married to an ex-colonel in the US military, Butler-Short has about 1,000 women statewide signed up for her organization and numerous women in other states as well, all supporting the Donald.The women's group has zero to do with feminism. "Many women who call themselves feminists are, to me, not feminine enough," Butler-Short said. "I love men who carry my boxes and know how to change a lightbulb."Virginia is a key state in the election, one which most believe Trump must win in order to be successful and win the White House. When asked about his declining numbers there Butler-Short stated she was puzzled by the polls as everyone she met, rich or working class was voting for Trump.Alice Butler, the daughter of a shoemaker and a housewife, left Ireland at the age of 18 in 1961 and made her way to London. She says her upbringing as one of eight children and her mother's strength and support made her immediately independent.She met her first husband, a Chinese businessman, in London and later moved to Singapore. Her first husband died and she married again, this time to an American intelligence officer. She accompanied him on several missions overseas, including when he was military head at the American mission in Somalia.It was when she was in Africa that she realized how precious the American way of life was and she was determined to preserve that for her grandchildren."Sometimes you have to take a bird's-eye view to become aware of the beauty - and the threat."She says these are very dangerous times for Americans and Trump is the only answer. She will play her part as best she can to elect him.“This country needs him and I will do everything in my power to help elect him. We must save America, That's why I fight for Donald Trump," she said, "because he's strong enough to make sure this will happen.""I want my grandchildren to say: 'My grandmother was part of the movement that saved America.'"It's a long way from Tipperary, but Alice Butler-Short is determined to leave her mark in the new world. If Donald Trump is elected she will certainly have done so.Report by Niall O'Dowd | @niallodowd | irishcentral.com

If Minister Harris had an ounce of accou
January 06 2020

FRS Cahir - For all your fencing

Your help is needed now

If Minister Harris had an ounce of accou

Over €7 million for Tipperary Rural Rege